Originally constructed in the early 1970’s, the Library at Rock Valley College was incorporated into a building that also housed various classrooms and office space. In an effort to clearly define and separate circulation routes leading to library functions versus non-library functions, our team was commissioned to study various options with the College. The consensus plan rotated the Library 180 degrees and focused the main entrance toward the public entrance to campus. In doing so, Student Life Space was developed at the entrance to the building which includes:

A curved glass wall acoustically separates the Student Life space from the Library space allowing the two spaces to visually become one. The various functions within the Library itself were also re-organized to position the more active spaces such as the circulation desk and open computers near the main entrance while integrating a skylight at the center of the facility to serve as a primary organizing element. Additional features within the Library include:

The aesthetic for the space was derived from the integration of natural materials and colors, and various existing materials were re-used throughout the renovated space including redwood paneling in order to provide a sense of continuity between the original facility and the renovated facility. 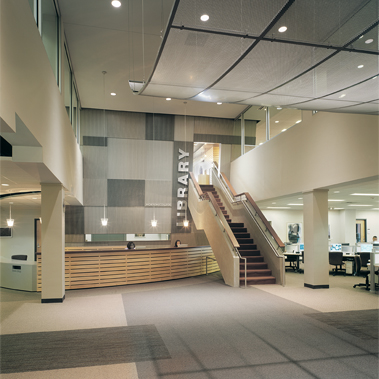 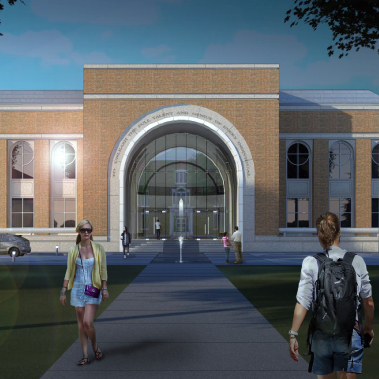